It's Time for a New Approach to Marijuana

Watch this 19-minute video of the I-502 talk I gave recently at the Bing Crosby Theater in Spokane, WA.

Back in the late 1980s, I agreed to be the anonymous "responsible businessman who supports drug law reform" guest on Jim French's KIRO radio show. My pseudonym: Jerry. My stance: Our society would be better off by taking the crime out of the marijuana equation. Back then, it felt risky to use my own name when talking drug policy. The next day, I was walking through Edmonds, out for my morning cup of coffee. Someone I didn't know drove by, rolled down their window, and hollered, "Hey, Jerry...right on!"

About twenty-five years later, I was more comfortable publicly owning my role as an advocate for rethinking our society's approach to marijuana laws. By this time, I was a board member of NORML (the National Organization for the Reform of Marijuana Laws) and had started giving talks around town on why we should learn from the Europeans and, rather than lock up pot smokers, embrace a "pragmatic harm reduction" approach that treats drug abuse as a health and educational challenge. One evening, a police sergeant whom I consider a friend asked me, "Why are you so committed to this? You and your friends could smoke pot with discretion all you want, and no one's going to bother you."

Only then did I realize why I was so committed to drug policy reform. Well-off white guys in the suburbs can smoke pot. But the majority of the 800,000 people arrested in the USA on marijuana charges this year (and the 9,000 people arrested in Washington State) were poor and/or people of color. Some have dubbed the war on drugs "the New Jim Crow."

Marijuana use — and how we deal with it — is a serious, expensive, and persistent challenge in our society. And it's time for a new approach. That's why I am co-sponsoring Initiative 502, which will legalize, tax, and regulate marijuana, allowing adults to buy up to one ounce from state-licensed stores (much like the liquor store model).

I-502 keeps marijuana illegal for those under 21 (as we are committed to keeping marijuana away from young people). It comes with strict DUI provisions (as we believe anyone driving intoxicated — with anything — should have the book thrown at them). And it calls for taxes on the legal sale of marijuana, which will raise (according to government estimates) $500 million a year for our state (about $200 million for our general fund and about $300 million for health care and drug abuse prevention work).

I-502 is not "pro-pot." (Most of its sponsors and supporters don't even smoke marijuana.) Rather, it is anti-prohibition. We believe that, like the laws that criminalized alcohol back in the 1930s, our current laws against marijuana use are causing more harm to our society than the drug itself.

Marijuana is a drug. It's not good for you. It can be addictive. But its use is a reality, and no amount of wishing will bring us a utopian "drug-free society." Marijuana is a huge underground business in our state — some experts estimate that it's our second biggest crop, after apples. Untold billions of untaxed dollars are enriching gangs and empowering organized crime. And tens of thousands have died in Mexico because of the illegal drug trade in the USA. Facing this challenge, we believe the safest approach is to bring cannabis out of the black market and regulate it.

I-502 is a smart law. It has been endorsed by the NAACP; the Children's Alliance (representing about a hundred social service organizations in Washington State, including Catholic Community Services and the Boys and Girls Clubs of King County); the mayors of Seattle, Tacoma, Bellingham, and Kirkland; the entire Seattle City Council; Seattle City Attorney Peter Holmes; former federal prosecutor John McKay; current King County Sheriff Steve Strachan (and his opponent in the upcoming election); many of our state senators and representatives (including Mary Helen Roberts, who represents my town, Edmonds, in Olympia); the editorial boards of The Seattle Times, The Olympian, The Columbian, and The Spokesman-Review; and many other caring people and organizations who have studied this issue.

Most arguments against I-502 are based on the assumption that more people will smoke pot if the law passes. Some opponents seem to believe that there's a huge reservoir of people wishing they could ruin their lives smoking pot, if only it were legal. I believe most people who want to smoke pot already do, and consumption won't change substantially if I-502 becomes law. Surveying societies that have decriminalized marijuana, there appears to be no evidence that marijuana use goes up with decriminalization. For example, in the Netherlands — which is famous for its relaxed marijuana laws — per capita cannabis use is about on par with the US, and use among young people is actually lower than in the US.

Many say marijuana itself isn't so bad, but it's dangerous as a gateway drug — "one toke and you're on your way to heroin addiction." European societies have learned that the only thing "gateway" about marijuana is its illegality. When it's illegal, you have to buy it from criminals on the street who have a vested interest in getting you hooked on something more profitable and more addictive. In 2001, faced with a troublesome spike in hard drug abuse in their society, Portugal decriminalized the consumption of all drugs. Ten years later, according to Portuguese government statistics, marijuana use had not gone up (in fact, cannabis use among Portuguese young adults is about half the European average), while their hard drug-addicted population has been reduced by half. Most importantly, drug-related crime is down, freeing up Portuguese law enforcement to focus on other priorities. And remaining hard drug users see the government as an ally in beating their addiction rather than an enemy out to arrest them.

Many worry about safety on the roads if marijuana is legalized. Of the 17 states with provisions for medical marijuana, there has been no evidence of an increase in DUI cases involving cannabis. But just to be sure, I-502 comes with very strict and specific DUI provisions.

And some are concerned that if we legalize, tax, and regulate marijuana, the federal government will override the will of the people of Washington State. No one knows for sure how the feds will react. But our country was designed for states to be the incubators of change. And, in the case of drug policy, there will be no change that doesn't come from the states. After all, it was individual states that defied the federal government and made possible the end of alcohol prohibition in the 1930s. Since the 1990s, individual states (currently 17) have allowed patients to use medicinal marijuana in direct opposition to federal law. And, when strict parameters are set and followed, the feds have generally stayed out. I-502 is just taking this to the next stage in a natural evolution of how our society views the challenges of marijuana — both keeping it away from young people, and regulating its responsible adult recreational use. At the same time, it promises to replace a huge underground industry with a carefully regulated and taxed one.

There are so many reasons to end the prohibition on marijuana. Whether you're concerned about the well-being of children, fairness for our minority communities, redirecting money away from criminals and into our state's coffers, stemming the horrific bloodshed in Mexico, or civil liberties, it is clearly time for a new approach.

When assessing the best way for our society to deal with the challenge of marijuana use, we need to be realistic. There has never been a drug-free society in the history of humankind. Marijuana is here to stay. That's the reality. Rather than being hard on drugs or soft on drugs, with I-502 we can finally be smart on drugs. 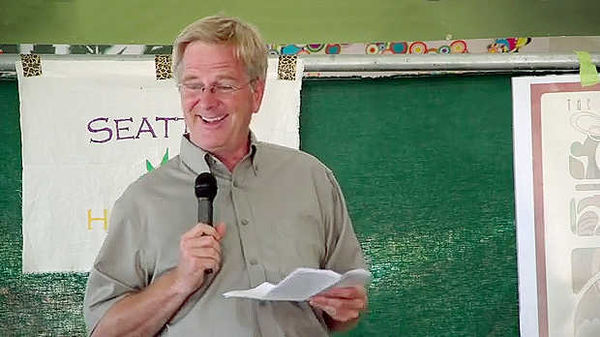 Cannabis use is a civil liberty

Watch Rick's interview explaining how cannabis use is a civil liberty

Video: That's How Prohibition Against Alcohol Was Taken Down

Listen to Rick's Interview about I-502 on Kiro Radio

To schedule an interview with Rick Steves, please contact Ashley Sytsma or call 425-608-4293.