Every year on March 17, bars around the US serve pint after pint of green beer. But if you go to Ireland on Saint Patrick's Day, the beer is never green. It's black — or actually "dark ruby," according to the Guinness Brewery.

In 1759, Arthur Guinness signed an astounding 9,000-year lease on a dilapidated Dublin brewery. The rent: £45 a year. Competition was fierce among Dublin brewers, and friends of the 34-year-old entrepreneur thought his idea was ridiculous. He began pumping out two varieties of beer — an ale, and a darker "stout porter," so named because it was popular among porters in London. Against big odds, his dark beer thrived. By 1868, Guinness had the largest brewery in the world.

Today, Guinness remains one of the world's largest beer producers, with breweries in 50 countries. Around the world, 10 million pints of Guinness stout are consumed each day (with a few extra on St. Patrick's Day).

Over the years, a clever ad campaign has helped fuel the beer's success. In the 1930s, the brewery was known for its animal cartoons that featured simple but catchy slogans such as, "Guinness is good for you," "My goodness, my Guinness!" and "Have a Guinness when you're tired." Whether or not it's a good idea to drink alcohol when you're fighting fatigue, the slogan certainly helped sell beer.

Guinness stout is known for its dark color and creamy white head. The color and slightly burnt flavor come from roasting the barley before the beer is brewed. The beer is carbonated with nitrous oxide in addition to the usual carbon dioxide, producing the thick white foam on top. Traditionally, Guinness is served at a slightly warmer temperature than most ales and lagers.

Because of the high carbonation, pouring a Guinness takes skill, and ordering one takes patience. To tap a perfect pint, Guinness instructs bartenders to use a "two-part pour." The glass should be tilted at a 45-degree angle and filled to three-quarters capacity. Then you must wait for the surge of bubbles beneath the foam to settle before the glass is filled to the brim. The overall process takes about two minutes.

Several years ago, a Dublin company worked on developing a process to cut down the pouring-and-settling time without disrupting the beer's quality...but Guinness afficionados weren't impressed.

A bartender at one of Dublin's oldest pubs told CNN, "Our customers will certainly not go for that. Guinness is a traditional drink and I don't think people will sacrifice that for a little extra speed and efficiency."

A visit to the Guinness Storehouse in Dublin is, for many, a pilgrimage. Although the home of Ireland's national beer welcomes visitors with a sprawling modern museum, there are no tours of the actual working brewery. And while it's no longer their biggest brewery — that one's in Lagos, Nigeria — this sprawling brewery complex fills several city blocks (64 acres, busily brewing 1.5 million pints a day).

The museum fills the old fermentation plant used from 1902 through 1988, which reopened in 2000 as a huge shrine to the Guinness tradition. If you step into the middle of the ground floor and look up, you'll find you're in the middle of a tall, pint-glass-shaped glass atrium — 14 million pints big (that's about 10 days' production) — soaring upward past four floors of exhibitions and cafés to the skylight. And if you look down you'll find Arthur's original 9,000-year lease enshrined under Plexiglas in the floor — at £45 per year, it was quite a bargain.

Each floor of the storehouse has a theme: The first floor is dedicated to cooperage – the making of wooden barrels, the second floor has the tasting rooms, the third floor features advertising and a theater with classic TV ads, the fourth floor is where you can pull your own beer, and the fifth floor has Arthur's Bar.

Warning: Some some visitors are surprised to find the vibe at the Guiness Storehouse to be more like a Disneyland for beer lovers than a working brewery. Instead of conveyor belts of beer bottles being stamped with bottle caps you'll find huge crowds, high decibel music, and wall-sized, dreamy TV beer ads. Lines can be horrible at peak times, both outside and at various stops within the brewery. To avoid the worst of it, start early and consider an online booking (tickets are cheaper between 9:30 and 10:45).

Atop the building, the Gravity Bar provides visitors with a commanding 360-degree view of Dublin — with vistas all the way to the sea — and an included beer.

Dave Fox is a veteran Rick Steves tour guide; Pat O'Connor is the co-author of the Rick Steves Ireland guidebook. 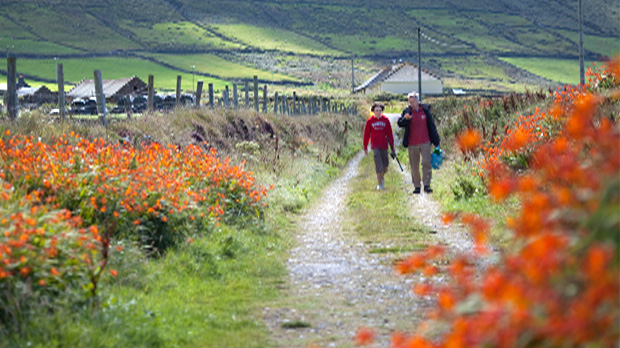