I love exploring the world of ancient Rome, with its grand architecture, fascinating culture, and stories of larger-than-life leaders. But since many of the 2,000-year-old empire's landmarks are reduced to ruins, it can be hard to make sense of the stones and rubble left behind.

To get a clearer picture of what everyday life in ancient Rome was really like, visit the well-preserved (and unlucky) city of Pompeii. Located just south of Naples, Pompeii was founded in 600 BC and eventually grew from its Greek and Etruscan roots into a bustling Roman trading city and port.

Neither rich nor poor, Pompeii was a typical middle-class town. To serve its 20,000 residents, the city boasted more than 40 bakeries, 130 bars, and plenty of public baths. Being a port, it also had brothels, restaurants, and entertainment venues that catered to sailors from all over the Roman world — many of whom didn't speak a lick of Latin. Most of Pompeii's buildings were covered in brilliant white ground-marble stucco, making it an impressive sight. And from its richly decorated forum, people had a postcard-perfect view of the looming volcano, Mount Vesuvius.

Then on October 24, AD 79, everything changed. At about 1 p.m., Vesuvius sent a mushroom cloud of ash, dust, and rocks 12 miles into the sky. It spewed for 18 hours straight, as winds blew the cloud south toward the city. The white-gray ash settled like a heavy snow on Pompeii, its weight eventually collapsing roofs and floors (but leaving walls standing). Though most of Pompeii's residents fled, 2,000 stayed behind. A bad move, because the next morning a red-hot pyroclastic flow struck Pompeii, dealing a fatal blow to those who had remained, and burying the city under 30 feet of volcanic ash.

After the eruption, people from nearby towns tried in vain to find the buried city. Because Pompeii was a major port, people naturally searched for it near the sea. But the eruption had filled in the harbor and pushed the coastline out, meaning Pompeii now lay inland — and its location would remain a mystery for more than 1,500 years.

In 1599, Pompeii was accidentally rediscovered during construction of a canal. Serious excavations began in 1748 and are still ongoing, making Pompeii the longest-continually-excavated site in the world.

Ironically, the ash that had destroyed Pompeii also ensured its preservation, leaving it frozen in time. As a result, its ruins offer the best look anywhere at life in an ancient Roman town, with its gridded street plan, villas and homes, commercial buildings, public baths, and colorful frescoes left remarkably intact.

Pompeii also exhibits small signs of everyday life. In the town's many "fast food" joints, holes in the counter show where containers once held food for hungry customers to grab as a quick meal. Public drinking fountains still stand along the city's main streets, many of which would have been lined with stalls and jammed with customers from sunup to sundown. And if you look closely at some of the walls, bright red graffiti pops out exclaiming that Julius was here.

Of course, the most compelling scenes in Pompeii are provided by its (permanent) residents. While excavating, modern archaeologists detected hollow spaces in the volcanic debris that were created when victims' bodies decomposed. By gently filling in the holes with plaster, the archaeologists created molds of the Pompeiians who were caught in the disaster. The plaster casts show remarkable details — the folds of togas, the straps of sandals, the pained expressions on victims' faces. Signs of animals have also been found, including a saddled-up horse that appears ready to carry its master to safety.

Excavations at Pompeii experienced a renaissance in 2018, when new artifacts and skeletons were discovered in a section of the city yet to be fully unearthed. New discoveries since then include more skeletons, vivid frescoes, an ancient snack stand, and evidence that the eruption had taken place two months later than historians had long thought. With fresh secrets sure to be revealed in coming years, evocative Pompeii will be worth visiting again and again. 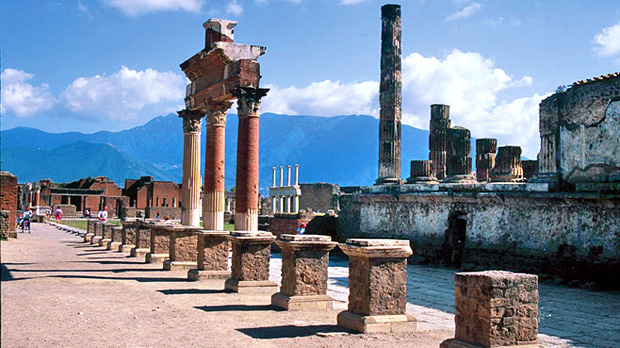