High in the mountains where France and Spain come together, I drove and drove. My goal: to stand atop a ridge looking into a rugged mountain-ringed basin where nature cradles an ancient tribe. There was an age when these pint-sized kingdoms were commonplace. But today, only a few survive. I finally reached my destination, deep in the rugged Pyrenees Mountains. Before me stretched the principality of Andorra.

Europe's midget countries have an undeniable curiosity factor. In Europe's tiny derby, the Vatican is the big little winner. Then comes Monaco, San Marino, Liechtenstein, Malta, and finally — measuring about 13 miles by 13 miles, with 80,000 people — Andorra. All of these countries would fit easily into Europe's next smallest country…the relatively vast Luxemburg.

While Andorra feels impressively remote (forget about getting there with the convenience of a plane or train), Andorra is just a couple hours' drive out of your way between the walled medieval time-capsule town of Carcassonne (in the south of France), and Barcelona (in Spain's far northeast).

In their national anthem, Andorrans sing of Charlemagne saving their land from the Moors in 803. Four hundred years after that legendary rescue, after a Catalan (Spanish) noblewoman married a French nobleman, the couple shared control of Andorra with a bishop from Urgell, a town just over the border in Catalan Spain. But 70 years on, disputes arose between their grandson and the then-bishop, and the shared-custody arrangement broke down. The two sides eventually agreed that the principality would be neither Spanish nor French — and this unique feudal arrangement survives today. While they still have co-princes from other countries (the president of France and the current Bishop of Urgell) as official heads of state, Andorrans stress that their nation is 100 percent independent.

For most of its long history, Andorra was an impoverished and isolated backwater. But in the last century, the nation has become wealthy — thanks to the same mountains that had hindered its development for so long. During the Spanish Civil War, Andorra sheltered huge numbers of refugees, from both sides of that conflict, and many of them stayed for good, significantly boosting the population. At the same time, skiing and hiking became big business, stoking a building boom. Huge Vail-esque ski condos, built of perfectly crafted rustic stone, both contrast and match the historic stone buildings they now dwarf and outnumber.

Andorra employs the special economic weapons so popular among Europe's little states: easygoing banking, and low, low taxes. The principality has morphed from a rough-and-tumble smugglers' haven to a high-tech, high-altitude shoppers' haven — famous for its bargain-basement prices. More than 10 million visitors — mostly Spaniards and French enduring famous traffic jams — pour in yearly to buy the kind of luxury goods sold in airport duty-free shops while avoiding their high taxes back home. Signs are commonly multilingual with French, Spanish, and Catalan. While Andorrans speak Catalan, and feel particularly connected to Catalunya, their commercial environment is as international as can be.

Back in the 1970s, on my first visit to Andorra la Vella — the country's capital and dominant city — I remember thinking it felt like a big Spanish-speaking Radio Shack. And while spiffed up today, it retains the charm of a giant shopping mall. As I walk down the streets, it seems there's nothing but banks and places to buy electronics, furs, and jewelry.

But times are changing. Since Andorra adopted the euro — and, later, a small sales tax — its prices are no longer drastically lower than the rest of Europe's. Add to that the ever-increasing popularity of online shopping, and the nation knows its days as a retail mecca are numbered. Instead, Andorra is investing even more into drawing visitors as a year-round outdoor-sports destination. (The Caldea spa — an 18-floor extravaganza fed by local thermal springs — is one of Europe's biggest, not to mention Andorra's tallest building.)

Andorrans have long grilled their trout, beef, and snails on open fires, and these days Andorran barbecue is a tourist attraction in itself, and the snails — fed a diet of thyme to become even tastier — are enjoyed by big-spending visitors.

A short drive from the capital into the higher valleys takes you to rugged little towns made entirely of stone. Their stout 12th-century churches and their stony bell towers stand as strong as the Pyrenees around them.

Pockets of Old World charm hide out even in the capital, which has an old center well worth a stroll. That's where you'll find the surprisingly small national parliament building, Casa de la Vall. Built on a rocky outcrop with its flag flying high, it was a private residence back in the 16th century. Its claustrophobic parliament chamber has 28 seats — four representatives for each of the seven parishes — with portraits of the current co-princes on the wall. The centuries-old kitchen adjacent to the Assembly Room evokes a time when representatives would travel from (relatively) distant valleys of Andorra. They'd eat and sleep in this building as they performed their governmental duties. While a humble reminder of a simple past, Andorrans still look to this building for leadership as their country builds an ever-better life for its citizens. 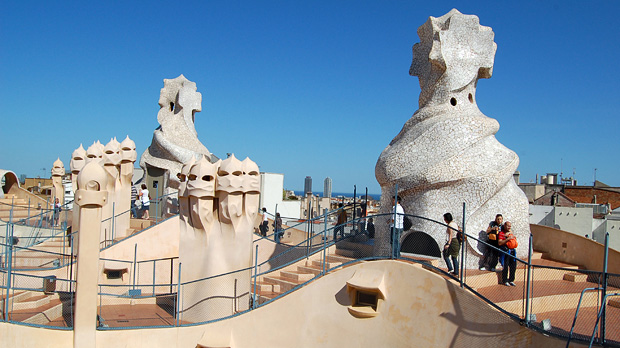