Sitting down in the yellow "taksi" at Istanbul's airport and seeing the welcoming grin of the unshaven driver who greeted me with "Merhaba" (hello), I just blurted out, "Çok güzel." I was surprised I remembered the phrase. It just came to me — like a baby shouts for joy. I was back and it was "beautiful" indeed.

I went through a decade-long period of annual visits, but then years passed before I again wished a Turk "merhaba," the local aloha. My first hours in Turkey after a long absence were filled with déjà vu moments like no travel homecoming I've ever had.

The taksi turned off the highway and into the tangled lanes of the tourist "green zone" (the area just below the Blue Mosque with a concentration of the most tourist-friendly businesses). I saw the dirty kids in the streets and remembered a rougher time when kids would earn small change aboard the city's dolmuses. These ramshackle vans are a wild cross between a taxi, minibus, and kidnapping vehicle, running along no set route, named literally — and appropriately — for the Turkish word for "stuffed." Hanging out the passenger doors, the kids would repeatedly yell the name of whichever neighborhood was coming up, sparking a noisy scramble to drop off and pick up passengers.

As with most tourists' visits, one of my first stops was the famous Blue Mosque. Stepping out of my shoes and into its vast interior — famously covered in tiles of turquoise (a color early French travelers took home as the "color of the Turks"), I noticed that something was missing. Yes…gone was the smell of so many sweaty socks, knees, palms, and foreheads soaked into the ancient carpet upon which worshippers did their quite physical prayer workouts (as Muhammad intended). Sure enough, the mosque had gotten a fresh new carpet — with a subtle design that keeps worshippers organized like letters along lined paper.

Prayer let out and a crush of locals headed out the door with me. The only way to get any personal space was to look up. It was night now, and a familiar but still breathtaking scene played again for me: hard-pumping seagulls powering through the humid, black sky before becoming bright white as they crossed in front of floodlit minarets.

Walking down to Istanbul's churning waterfront along the bay called the Golden Horn, I missed the old Galata Bridge — so rusted with life's struggles. But the vivid street life — boys casting their lines, old men sucking on water pipes, sesame rings filling cloudy glass carts — has retaken the new bridge.

And on the sloppy adjacent harborfront, the venerable "fish and bread boats" were still rocking in the constant churn of the busy harbor. In a humbler day, they were 20-foot-long open dinghies — rough boats with battered car tires for fenders — with open fires grilling extremely fresh fish. For a few coins they'd bury a big white fillet in a hunk of white bread and wrap it in newsprint for hungry customers, which often included me.

A few years ago, the fish and bread boats were shut down — no licenses available. But after a popular uproar, they've returned: They're a bit more hygienic now, and the fish are no longer wrapped in newspaper — but the boats are still bobbing in the waves, festively lit, and slamming out fish. These fish sandwiches, still well under $5, remain the best poor-man's meal in town.

In Turkey, I have more personal rituals than in other countries. I cap my days with a bowl of sütlaç — rice pudding with a sprinkle of cinnamon, still usually served in a square stainless-steel bowl with a matching spoon not much bigger than a gelato sampler.

And I always challenge a local to a game of backgammon — the boards are still a feature in restaurants, teahouses, and cafés, with softer wood inlays worn deeper than the hard wood. Boards no longer smell of tobacco, and now the dice are plastic, with obedient dots rather than the tiny handmade "bones" of the 20th century, with dots that didn't line up. But if you don't move your checker immediately, locals will still impatiently move it for you — as a bystander did this time after I paused to contemplate my options. There's one right way to play backgammon here…and everybody knows it.

Today in Turkey the people, like those dots on the dice, line up better than they did just a few decades ago. There's a seat for everyone on Istanbul's well-run public transit, which is no longer "stuffed." There's a bit more rigidity to the chaos here now, and each of my déjà vu moments shows a society that stays the same, while enduring great change. 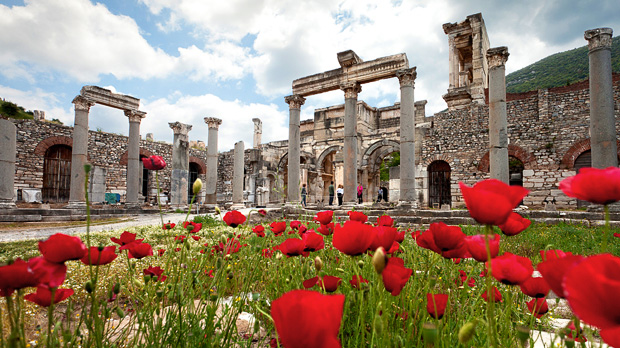