Five hundred years ago, Italy was the center of humanism. Today, the self-assured Sienese remember their centuries-old accomplishments with pride. In the 1300s, Siena was one of Europe's largest cities and a major military force, in a class with Florence, Venice, and Genoa. But weakened by a disastrous plague and conquered by her Florentine rivals, Siena became a backwater for six centuries.

Siena's loss became our sightseeing gain, because its political and economic irrelevance preserved its Gothic-era identity, most notably its great, gorgeous central piazza — Il Campo — which gets my vote for the finest piazza in all of Europe.

Most Italian cities have a church on their main square, but Il Campo gathers around Siena's city hall, symbol of rational government, and a tall municipal tower. If it's true that a society builds its tallest towers to its greatest gods, then Siena worships secular effectiveness more than it trusts in God. This video clip gives you a fun peek. (3 min 19 sec)

Watch the TV Show: You can watch Rick's entire half-hour "Siena and Tuscany's Wine Country" show by purchasing our 10 New Shows 2017–2018 DVD Set, or stream it online (for free).

Be there: You can savor two nights in Siena on a Rick Steves Best of Italy tour. 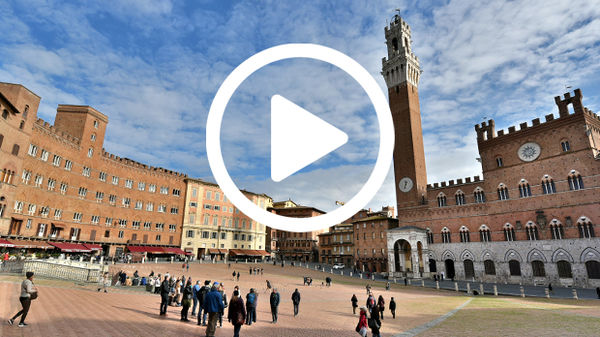