The sidewalk going up the Aare River is congested with wet and happy Swiss, hiking upstream in swimsuits just to float back into town. I join them — marveling at how this exercise brings out the silly in a people who are generally the polar opposite of goofy.

Every hundred yards a railing with concrete steps leads into the rushing river which looks glacial blue but is surprisingly warm. Leaping in, I'm immediately caught up in the current and propelled toward the grand capital city of Switzerland amid carefree swimmers and a flotilla of rubber life rafts.

Nearing the Marzilibad park, I stroke over to snare a metal railing — always a bit nervous that I'll miss the last one and rush toward the city's scary weir and, it seems, oblivion. Hanging onto the railing was a tanned and wiry grandmother and several giddy children clearly enjoying an afternoon going up and down the river.

That evening for dinner, I walk downstream to that scary weir where a trendy restaurant has been built literally over the rushing river. I enjoy tasty local trout over see-through floorboards as the noisy roar of the racing river masks conversations of the Swiss sipping beer on the open-air sofas.

Strolling along the river after dinner, I pass a man waterskiing in the current behind a long, playful bungy cord tied to a tree. I reach the city's mascots, Pedro and Tana. These two 26-year-old bears — locals say that's extremely old for bears — are kept in an old-fashioned concrete pit and serve as targets for preschoolers tossing peanuts. For years graffiti from the B.L.M. (Bear Liberation Movement) has demanded better living conditions for the poor old captives of Bern. (And the city has apparently heard, as a new, cheerier pit — more acceptable to animal activists — is in the works.)

Bern is packed into a peninsula created by a tight bend in the river. Crossing the river from the bear pits I enter the old town — a delight to explore on foot. The lanes are lined with three miles of arcades, providing lots of shopping opportunities. This is my kind of shopping town: Prices are so high, there's no danger of buying. The local slang for the corridor under these arcades is Rohr (German for pipe). To stroll through the town is to go Rohren (piping).

As the city grew over the centuries, each of its successive walls and moats were torn down, providing vast, people-friendly swaths of land. Today these are elongated "squares," popular for markets and outdoor cafés — the top places to be seen in the evening.

Buildings new and old throughout the city are a uniform gray, from the creamy Bernese sandstone, quarried nearby. In the 16th century, the city commissioned many colorful fountains to brighten up the gray cityscape, to show off the town's wealth, and to remind citizens of great local heroes and events. They also gave local artists something to work on after the Reformation deprived them of their most important patron, the Catholic Church.

Bern's 15th-century cathedral, Catholic-turned-Protestant, is capped by a 330-foot-tall tower, the highest in Switzerland. During the Reformation, religious icons were destroyed by Protestants. The church was originally adorned by 26 separate little chapels and altars dedicated to Mary and the various saints. When the Reformation came to town in 1528, all this was swept away by iconoclasts who believed that images distracted worshippers from focusing on God. The new center of attention was the pulpit from where Protestant preachers shared the word of God — not in Latin...but in the people's language.

The parliament meets in the old town. You may brush elbows with some high-powered legislators, but you wouldn't know it — everything looks very casual for a national capital. Drop into the parliament's welcome center and pick up the generous literature on the Swiss government. Its bicameral system was inspired by the US Constitution, with one big difference: Executive power is shared by a committee of seven, with a rotating ceremonial president and a passion for consensus. This is a mechanism to avoid power grabs by any single individual...a safeguard that the Swiss love.

The fine granite plaza in front of the parliament has 26 squirt fountains (one for each canton or Swiss state). Oblivious to the fact that half of the Swiss gold stock is buried in the country's Fort Knox under the square, kids dance with each watery eruption.

Though I've said it's almost criminal to spend a sunny Swiss day anywhere but high in the Alps, I'd make an exception for urban but easygoing Bern. 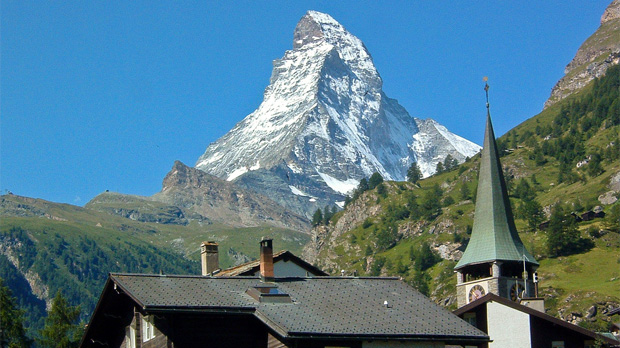